Why Most People Have Ethical Obligation NOT To Vote 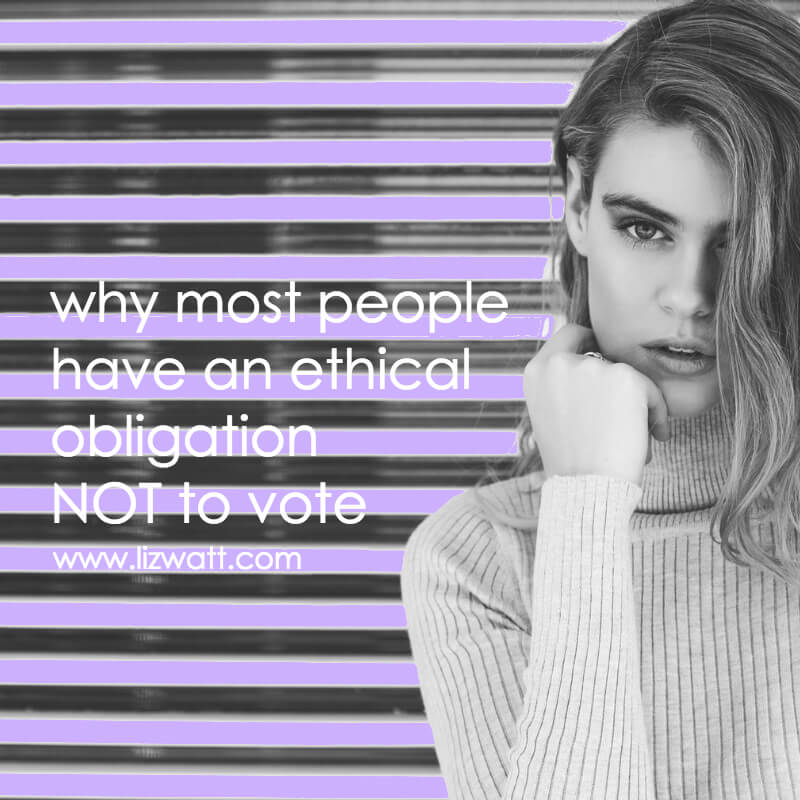 I’m going to start this post, by saying this is not intended to be about politics. Or maybe it is. Who knows where it will end?

There is a federal election in Australia this weekend – there is an opportunity to vote early, but the majority of the country will vote at the polls on Saturday.

There’s a major election going on in the United States of America, and just this week Britain voted to leave the European Union.

There’s a lot of big shifts in politics and power going on in the world at the moment.

But You’re Not Supposed To Talk About Politics, Liz

Some of the most fundamental issues that drive our lives, our society, our planet – on a daily basis.

It’s often deemed impolite or crass to discuss money, politics, or religion, let alone sex. I’ll leave the question of why to another blog.

But this is bizarre, given that politics, regulation and legislations is based on cultural and individual beliefs and values and drives the way we live.

And that religion and differing beliefs and values is the cause of some of the biggest conflicts on the planet today.

And that money drives a huge amount of decisions that are made by people, families, businesses, companies, governments…on a daily, hourly, minute-by-minute basis.

Yet we don’t discuss these things, and yet maybe if we did-there would be the opportunity to understand other perspectives and see the big picture

Our Education System Has Failed Us

Because our society does not support discussing these things openly, we don’t.

How do I know? Look at the state of our economy, religious wars, spiritual unconsciousness, rape and pillage of the planet, and self-destructive behaviour of so many people through drugs, alcohol, promiscuity.

Shhh…You’re Still Talking About It Liz

The fundamental things that drive the daily life of every individual on our planet are swept under the table – it’s just not polite to talk about it.

We don’t talk about stuff. Because people get emotional.

People take it personally when your opinion is different to theirs. They think you’re having a go at them. And so they get defensive, needing to fight for their beliefs and their view of the world – because without the things that define who they are, who are they? 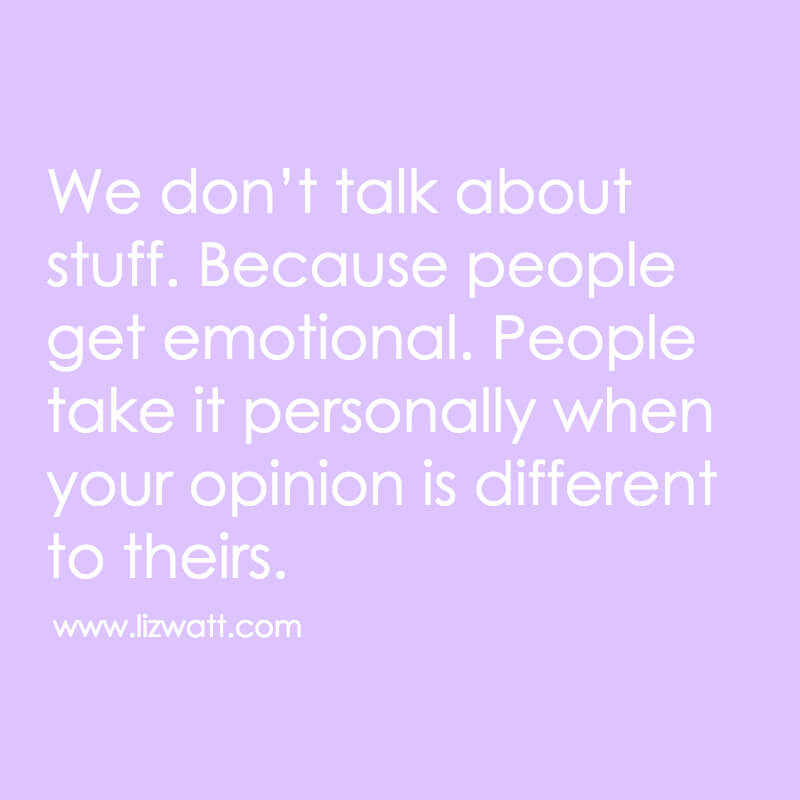 As emotional levels go up, intelligence levels go down.

And so we end up with fights, wars, mean girls, and conflict.

Maybe the thing that we should be teaching in our education system is emotional intelligence. Where the individual is taught to be open to the views, ideas and perspectives of others. Where we actually work together to see how these different ideas can synergise to create an overall solution that actually makes the world better.

Rather than smack another country, culture or individual up, call them “wrong,” “stupid” and other such names, and force and cajole them until they change their beliefs to our way – the “right” way.

So that we can relax and feel safe and comfortable again.

Maybe that’s what we should be teaching in our education system.

People Have An Ethical Obligation NOT To Vote

I knew I had a point to make.

I guess it’s this.

Most people have an ethical obligation NOT to vote.

Because They’re Not Informed

If you don’t know all the complex issues affecting the welfare of your entire country (and not just your self, because it’s about the country and this affects every one), how can you place an informed vote?

If you don’t know ALL the policies of the party you are voting for, then how can you place an informed vote?

If you don’t know for sure that the individual candidate you are voting for aligns with all the policies of their party, then how can you place an informed vote? (How do you know the party won’t chuck them out in a year? It happens.)

How the heck do you inform your self of all the issues and the possible solutions and know that the person you put in power is going to make decisions for every one, not just their own demographic.

What Is An Informed Vote?

I guess an informed vote is one where you know all the issues, and all facts, on all sides.

It’s starts with emotional intelligence and the desire to be open to new ideas and new ways of thinking, to explore and to come to a final conclusion for your self, without pre-judgement.

It’s about making sure that your needs are met without harm to others and the planet.

It’s about voting based on the right person to address the issues in a constructive way – not just in a way you’re your family votes, or that makes you feel better (a.k.a. rational ignorance).

It’s something that’s really hard to do, because we just don’t talk about these things…politics, that is.

Because we don’t talk about politics, it has a shroud of secrecy over it. It allows politicians to get away with big, bold, seeping statements, with little or no accountability, no qualifications for the job, and often, more uninformed about certain topics than the average voter.

Maybe if we talked about these things, the system could be improved – not because the politicians decided to do so, but because the people were informed and had the courage to speak up and make it happen.

So can you have an informed vote? I’m actually not sure.

In all my research on the Australian federal election, I still can’t find a simple, objective resource that gives me a summary of the issues, the policies, the individuals and their policies.

That would be a start.

There’s some really big things going on in the world at the moment – where people have the opportunity to voice their opinion, and be heard. But should they?

In the scheme of things, of the millions of votes, does yours really matter?

If you vote a leader in who turns out to be corrupt, unethical and make terrible decisions for the country, are you part of the problem?

Do you need to take some responsibility for the outcome?

Or do you turn a blind eye, and blame the politician, or the individual?

In order to stop that, what do you do to inform your self as much as possible so that you place a vote that matters and that makes a difference?

If you can’t make an informed vote, do you have an ethical obligation NOT to vote? If so, that’s the majority of the population, including the politicians.

This blog went in a direction so far from where I started, but I guess that’s where it needed to go. It’s opened up a huge amount of issues that could start another ten blogs. But I’ll leave that for another day.

I’d love to know what you think about these issues. Leave a comment on your thoughts.